Have you been wondering what that bright star is that appears right now after the Sun goes down? This object is the 3rd brightest object in the sky, right after the Sun and Moon. It is also the 2nd closest object to Earth. It is none other than the 2nd planet out from our Sun. Named after the Roman Goddess of Love and Beauty, the planet Venus. Currently our Evening Star, one can see it from 7:50 pm (at sunset) until 11:20 pm sinking in the sky from the Northwest at this time.

Venus is about the same size as Earth, at 7,000 miles in diameter. Its atmosphere contains mostly carbon dioxide. This gas is very thick and traps heat on the surface like a runaround greenhouse effect, resulting in very high temperatures. Prior to the Soviets sending probes to the surface, many astronomers thought that Venus was similar to Earth. It seemed obvious since Venus is only 28% closer to the Sun than Earth is.

The surface of Venus, as seen from the Venera landers.

It wasn’t until the late 20th century that the Russians landed two landers on the planet. Their names were Venera 7 and Venera 13. Venera 7 was launched on August 17, 1970 and landed on Venus in December of that year. It was found at that time that the temperature at the surface of Venus was 887 °F. This world became the hottest planet in the Solar System. Venus goes through a backward rotation different from the other planets. The sun rises in the west and sets in the east. The rotation itself is very long, about 243 earth days.

Image of the last Venus transit.

Oddly enough, Venus’s day is longer than its year. It orbits the sun in only 225 days. Like the new moon Venus also has a new Venus phase, which at certain times every few centuries results in a transit, where Venus appears as a small dot crossing the Sun. The last time this happened was in 2012. The transit lasted 6 hours and 40 minutes. The next transit won’t be until December 10, 2117.

The planet’s atmospheric pressure is more mysterious. According to the landers previously mentioned, the pressure is nearly 90 times that of Earth. Imagine doing scuba diving with safety equipment and then swimming about a mile down within the ocean floor. That is equal to the amount of air pressure one can experience on Venus. 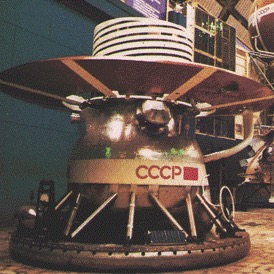 Venera 13 was launched on October 30, 1981 and landed on Venus in March 1, 1982. Venera 13 functioned for at least 127 minutes (the planned design life was 32 minutes) in an environment with a temperature of 457 °C (855 °F) and a pressure of 89 Earth atmospheres (9.0 MPa). The descent vehicle transmitted data to the satellite, which acted as a data relay as it flew by Venus. Venus’s atmosphere also contains sulfuric acid and hydrochloric acid droplets. The ashes made of mostly sulfur dioxide rise in the atmosphere and create these acids. It was due to these hellish conditions that other probes and landers were not able to make it to the surface to analyze the planet.

In 1992 NASA launched the Magellan spacecraft, which orbited Venus. It was designed to map its surface by using synthetic aperture radar and to measure the planet’s gravitational field. The radar equipment was able to map about 98% of its surface.

Venus is currently found in the constellation of Taurus the Bull, southwest of the Pleiades, also sometimes known as the Seven Sisters. Stars and Science Austin holds Star Parties with our telescopes. As soon as the lockdown is lifted, we will resume our Stargazing Program and show the public real images of the 2nd planet out from our Sun!